Ideally, as you select additional categories, it would be nice if the GUI automatically grayed-out all other categories in the list that would yield zero results.

On a related note, I've been cleaning-up the categories in my Unify database using a SQLite editor to reduce some of the clutter, redundancy, misspellings, etc. (and well as satisfy my OCD). Do you know of any way I could batch-write my modified presets.db data back to the *.upf and *.unify preset files?  Otherwise, Unify will automatically overwrite any changes I made to the database the next time I load a new library or if I were to choose "Rebuild the Database" from the GUI. I suppose I could write a utility to do this, but was wondering if there was an easier way.

The principle of using OR rather than AND is that each selected category defines a subset of all the patches, so if you select more category, you are selecting more than one subset, i.e., you are selecting their union, not their intersection. The former is simpler to understand, and more commonly used, but I agree that intersection-search could be useful.

In a future version of Unify, I hope to have an expanded patch browser which will offer more search options, including AND vs. OR. For now, since you're comfortable using the SQLite DB Browser, you can query the database any way you wish.

Regarding cleaning up the database:

If the rewrite-rule types supported by scrub.xml are not sufficient, suggestions for additional ones are welcome.

Thanks for your reply. Like I said, I just can't envision a scenario where one would use categories as a union search rather than an intersection. If the purpose of the browser's filter is to track down a particular sound, the more criteria I provide, the more granular the results should be.

One thing I did with my revised SQLite DB is split up "compound categories" such as "BPM Key" or "Arp + Strings" and divide all Categories into a set of Instruments and Attributes. For example, to find all Omnisphere Multis of a Pad with Piano and Strings and featuring Arp, BPM, Latch, and using MIDIBox looks like this: 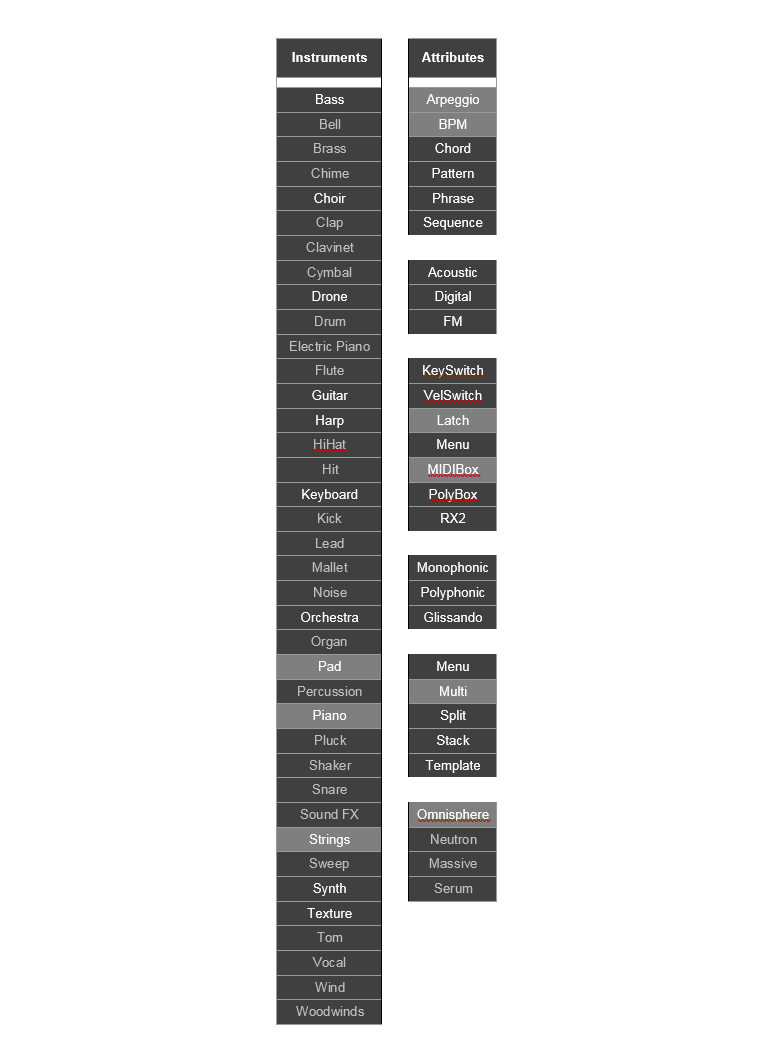 *Note that dimmed items indicate instruments and attributes with zero matches based on the current selections. Using just the Instrument and Atrribute properties in combination with using Search Text to search the Comment field makes finding a specific patch way faster and easier.

A similar interface could be used during the save/creation of the patch. It would be easier to pick from a list all the instruments and attributes that match the new patch rather than type them in. Once a set of Instruments and Attributes is well-defined, it should require valid justification to create a new one rather than use an existing one. This would eliminate the runaway nature of creating more and more categories as well as avoid the risk of creating misspelled, plural or redundant versions of existing categories.

Also, thanx for the tip on the scrub.xml file. With it, I was able to fix a few additional quirks, misspellings, and redundancies. You might want to make note of some of these for future versions of Unify:

Finally, regarding "Tags", I'd be curious to know if anyone other than John (@PlugInGuruForums) actually uses this feature to help search for a sound; especially since the Comment field is way more descriptive and useful in learning what a sound does, what inspired it and how macros, modulation, aftertouch, etc. affect it. Seriously, I challenge anyone to explain the difference sonically between some of these tags:

I suspect that a lot of time and energy is wasted during patch creation and SW development for the Tag feature. There would be no love lost from this Unify fan if the Tags were to mysteriously disappear. 😉 I, for one, would rather have a Comment field larger than 2 text lines in the UI so that we don't have to scroll or click the Save button just to read it.

From the Unify Manual:

"Narrow Down" implies an Intersection search.

Also, in the "Using the Patch Selector" section it states:

On my Mac, I have to Cmd-Click on a list item or click on different item to deselect it. Cmd-Click also allows you to select multiple items (as it should). I suspect the manual just needs updating.

I have updated the manual pages very slightly, to correct the inconsistencies you noted.

I have started experimenting with OR vs. AND for the patch database queries, and am thinking about how to get this cleanly into the GUI.

BTW, in case anyone is wondering, since Unify doesn't currently have a separate Instrument and Attribute field, I accomplished what I mentioned above by adding the prefixes "instr: ", "attr: " and "vst: " to existing all my cleaned-up categories. Because Unify lists categories alphabetically, adding the prefix helps group them all together in the browser so they're easier to find. Below is a list of the newly re-purposed Categories I created as well as a sample of what they look like in Unify interface. Also, I keep a backup copy of my presets.db file so I can replace it in the event that Unify overwrites it.

@getdunne, this is why I was looking for an intersection search capability. 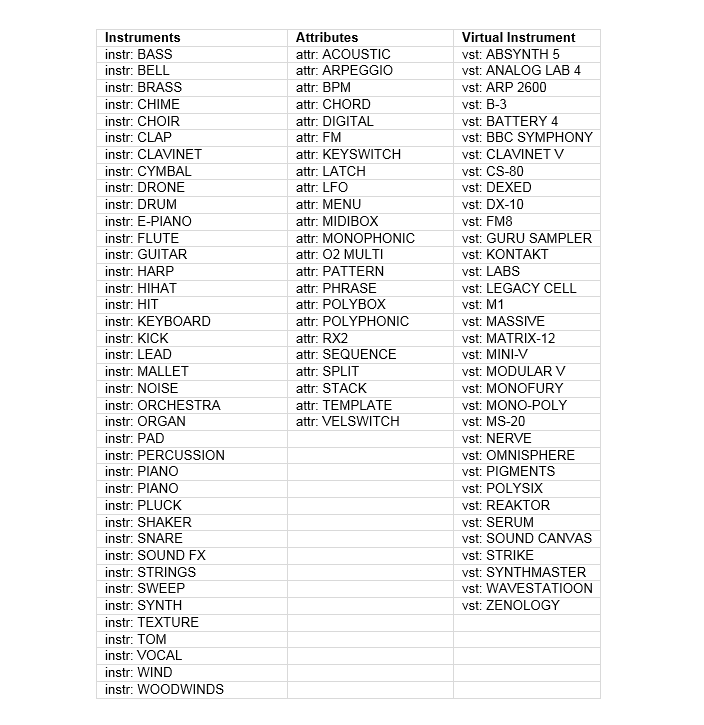